My favorite season is finally here.  Hello Fall…I love you.

I love your crisp mornings, the call of the blackbirds, warm afternoons, cool evenings, the slant of long shadows of the sunsets.  Mums, pumpkins and pansies in the garden.  And of course weekend football games with a basket of yarn by my side ready to be crocheted or knitted into something warm and cozy.

There is also the urge to nest.  I always want to nest and fluff my home with the change of seasons, but more so in the fall and spring.  This year was no different, but I fought the urge to splurge on more things to decorate.  Instead I hit the closets and pulled items from other areas to create a very scaled down and simplified fall decor. 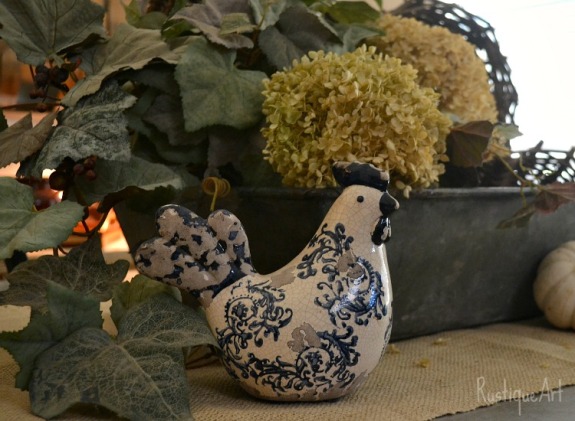 I love this little chicken. I picked her up at Hobby Lobby about a year ago.  At half price she was really irresistible.  She’s so sweet and looks great front and center of my dining table fall centerpiece.

I went with a more the more subdued colors this year since I’ve never been a huge fan of orange, I love that I have the choice of white pumpkins, the greenish gray pumpkins are awesome too.   But again, I didn’t want to spend money on things that were temporary, although I did treat myself to a couple bags of mini pumpkins to sit around the house.

I dug my burlap runner out and dragged the old galvanized bin out from under a dresser.  Had to take outside to dust it.  I found a family of dust bunnies living in it.  The secret is out…you now know I don’t keep a perfect house.   Confession is so good for the soul.

I stole some greenery from another room and from storage, gathered three grapevine hearts that I seriously considered hanging on the wall, but decided to nest them inside the galvanized bin with the greenery and some dried hydrangeas.  Plopped a couple of pumpkins down and called it done.

The table is flanked with a couple of rust plates because I only have two, and then I added my grandmother’s amethyst glass candle holders as an afterthought because I think purple is a perfect fall color.

That’s pretty much it except for a couple of pumpkins on my mantle which I haven’t touched for months, only to dust it once….oops, another confession.

In the entry I did change out the pears in my vintage sewing drawer for some mini pumpkins…nested pumpkins are pretty, but I really think all white would look better.

I hope you are loving the fall as much as I do.