Catchy title yes?
But now that I have your attention, here’s the scoop
in the last two weeks I have found some of the most primo junk at local antique malls, and…
everything that I’ve bought and brought home has been a treasure that was found while I was squatting down or on all fours. I’m telling you, whoever said shopping for junk was easy needs to be hog tied. It’s not easy and is not clean either.

The dust, the grime, the ??? (always carried wipes with you)

Yesterday I hit pay dirt again…but I’ll save that for another post.

Today is about the trip I made all the way out to Frisco Mercantile about two weeks ago, to pick up some Annie Sloan Wax and to my dismay (I didn’t call first, lesson learned) my stockist was out. I even called her while standing in her booth in tears (drama) to see if see had some at her McKinney location. In my irrational state of mind, I figured what’s another 20 minutes east when I’d already driven 30 minutes to get to where I was.

She didn’t have any there either, something about a shipping mishap. Oh well! I was already there and Riley (DD) was already lost in junk treasure island, I thought why not just look around…what could it hurt 🙂 While I was browsing, I called the mister to let him know that my trip was for naught while trying to milk all the sympathy I could out of him.  I bent over to scan the lower half a an interesting booth I happened to stumble upon.  While doing the 360 degree scan with my trained eyes, I caught a glimpse of something gray.  yum!   I stopped talking long enough to swallow and take a breath, then I reached out and touched my reason for no…the reason I was going to be able to justify my 30 minute trip to Frisco in the middle of my day.

It was so dreamy.  And as luck would have it, my mister was still on the phone when I found it.  So I didn’t even have to take the time to push the buttons to call him and explain why I needed to buy this awesome piece of galvanized glory.

I casually told him that I had found a lovely metal trough of some sort, that it was large, galvanized and (checking the price tag) gasp!!!!!  AFFORDABLE!!!!  Of course all of this conversation was laced with just a wee bit of whining, for effect.

(fist pump, grinning from ear to ear, doing the flashdance steps in the middle of an antique mall)

no one was watching I’m totally sure.  I really don’t care if they were…I got it, I got it!   I found Riley and told her that I was ready to go.  I mean after all, I got what I wanted (score)!

She wasn’t ready quite yet, but I began to make my way to the front just for grins…I mean after all, she needed to get back home to get ready for work and I had a new toy to play with.  So hurry up already!!!

I took a photo of it with my phone before they could wrap it up.  But the cashier was quick, just as I was snapping the pic she began to grab and wrap, so the photo is awful, of course and I’ve already fixed it up so the before is “really” the before.

You know what I find so funny.  It’s that there are probably readers that are thinking to themselves right now; “is she crazy or what? What the heck is so wonderful about that ugly piece of metal?”

That’s perfectly understandable.  I think that about a lot of things that other people are ga-ga over.  It’s all a matter of preference and taste.  I simply love industrial metal, old rusty iron stuff, peeling paint and crusty junk.  I’m not alone, but I also know it’s not for everyone.   And that’s okay…that just makes life more interesting.

Wanna know something else?  You can really tell the worth of something by how much crap you can put in it.

I learned a few things about myself recently…

1) I don’t do vignettes very well

3) I don’t know when enough is enough

You can see my ongoing project in the background (another before and after) you’re getting a pre-before glimpse. 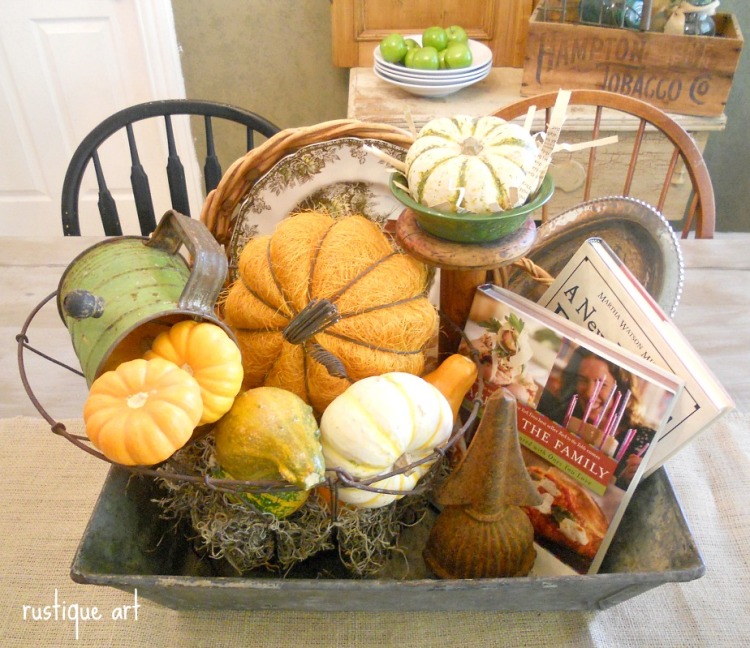 See… you can cram a lot of stuff in here.

which is probably why my mister told me to buy it…to have something else to store all of my junk in.  I knew he had an ulterior motive.

Now… since I’ve opened my big mouth and confessed that I’m not a big fan of orange, my DD, Riley will probably read this post, even though she never does, and she will see that statement and probably think that I don’t love the flowers that she brought me today.

but she would be wrong because I love my beautiful orange daisies and the ferns are from my flower bed! Shocker…something survived our drought and 100+ temps this summer.  It helps that they grow on the north side of the house and we have watered that side of the house a lot, the recent rains have helped too.

but…I especially love them because they are from her and she surprised me with them today.  I almost cried.  I love them.  And they look spectacular in my aluminum pitcher that I bought last Sunday at the Frisco Mercantile.  This time the mister was with me and he just rolled his eyes.  He knows it’s useless to try and understand why I love what I love.  He should just be thrilled that I have affordable taste in home decor.

Maybe I should get a bumper sticker made for his truck;

“I am blessed; My wife buys junk”

By clicking the photo above you can check out the other participants of the 31 days of change!

Click here to see all Before & After posts to date